The squeeze on UK households was evidenced this week as average weekly earnings grew at 2.2% – well behind a CPI inflation rate of 3% (which as an aside means that Mark Carney, the BoE Governor, has been spared the task of writing a letter to the Chancellor Philip Hammond, explaining why inflation has deviated by more than 1% from their 2% target). Interestingly, looking at the breakdown, the categories that tend to have a high import content (such as food prices, which have risen 4.2%) continued to pick up in October (the pound’s sharp fall since the EU Referendum makes imports more expensive). 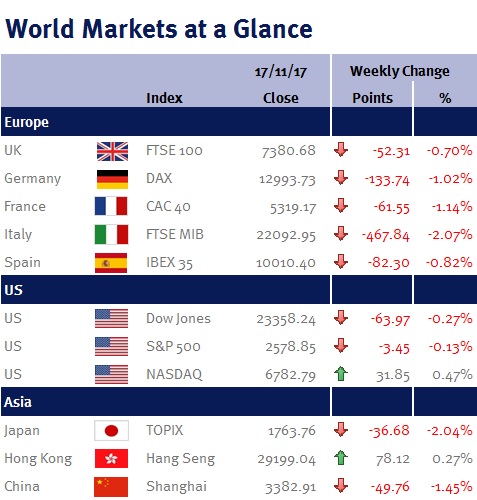 Given this squeeze on household budgets, it wasn’t a surprise that Visa’s UK Consumer Spending Index showed that household spending in October declined at the fastest rate in four years or that the British Retail Consortium reported that shoppers’ footfall fell the most since the EU Referendum.

UK retail sales (from the ONS) also looked somewhat lacklustre: while retail sales volumes (excluding auto fuel) rose by 0.1% in October, the annual measure turned negative (-0.3%) for the first time since March 2013. Although, as I wrote last week (please see here), retail sales data can be notoriously volatile, it does cast a shadow over the important Christmas shopping period.

Additionally, while the UK unemployment rate held at a 42-year low of 4.3%, employment fell by 14,000, the first decline since October last year and the biggest drop since June 2015.

In the US, core CPI accelerated for the first time since January – rising at a pace of 1.8% compared to the prior month’s 1.7%. Although this is a negligible increase, it does get the Fed closer to its 2% target, and therefore solidifies my expectation that policymakers will increase US interest rates again in December.

US retail sales came to a near standstill: excluding car purchases, sales were up just 0.1% on the month compared to a gain of 1.2% in September. However, these numbers will be distorted by the recent hurricanes.

The Thanksgiving holiday means it should be a quiet week ahead in US, with the main announcements being the latest US initial jobless claims number and minutes from the last Fed monetary policy meeting.

It will be a slightly busier week ahead in the UK as Philip Hammond, the Chancellor of the Exchequer, delivers his Autumn Budget on Wednesday (22 November 2017). We also have Q3 UK GDP. And in Europe we minutes from the last ECB monetary policy meeting.

Additionally, over the weekend we should discover whether or not Angela Merkel’s coalition talks have been successful concluded before her self-imposed deadline. Failure would raise the possibility of the country’s first repeat election.