Interestingly, the Fed appears to be pressing ahead with its plans to ‘normalise’ monetary policy after stating that it is sticking with its forecast for another increase this year, followed by another three increases next year, despite weak CPI and retail sales data. 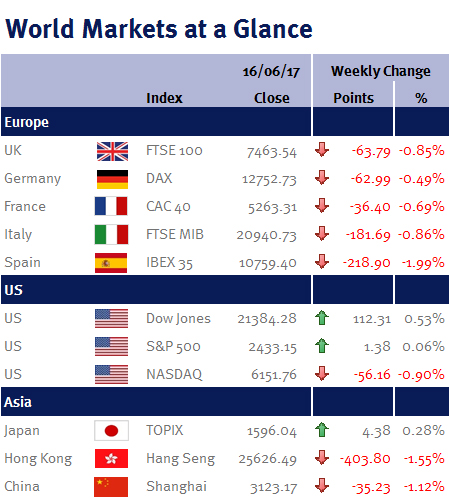 US CPI (also released on Wednesday 14 June 2017) fell from 2.2% to 1.9%, while the core measure (which excludes volatile items such as food and oil) slowed to 1.7% from 1.9%, while US retail sales dropped 0.3%. Weak consumer spending doesn’t bode well for Q2 GDP growth given the consumer accounts for around two-thirds of the US economy.

Consequently, I remain sceptical and continue to believe that US interest rates will rise at a much slower and shallower rate than currently forecast by the Fed – especially as Brent crude oil fell to $46.65 a barrel (having started the month at just over $50 – and the year at $55.41). Inflation is unlikely to sustainably rise while core inputs (such as oil) are falling.

Also as expected, the Bank of England (BoE) left interest rates unchanged yesterday (Thursday 15 June 2017). However, everybody was caught off-guard by the fact that three out of the eight policymakers voted to increase interest rates!

While this does not mean that the BoE is about to increase interest rates (one of the dissenters, Kristin Forbes, voted for her last time before stepping down), it does make me question their analysis. While I accept that UK inflation is running ahead of the BoE’s 2% inflation target at 2.9%, this is predominately due to the pound’s sharp fall since the EU Referendum result last June, which makes imports more expensive. Additionally, these three policymakers appear oblivious to the slowing pace of economic growth (Q1 GDP growth was just 0.2%) and the squeezing of household purchasing power due to weak wage growth.

In fact, the long-awaited and long-feared Brexit consumer crunch appears to be finally here. Yesterday (Thursday 15 June 2017) DFS, the sofa retailer, warned that their number of shoppers had fallen significantly due to uncertainty regarding the general election and macroeconomic environment. This follows a similar slowdown warning last week from AO World, the electrical appliance e-tailer, while Visa Europe said on Monday (12 June 2017) that household spending fell 0.8% in May – the first fall since September 2013.

Consequently, I am sticking with my view that UK interest rates are unlikely to rise this year or next.

This weekend coming (Sunday 18 June 2017) we have the second round of the French Parliamentary elections. Emmanuel Macron’s centrist La République En Marche projected to win around two-thirds of the seats in the lower house. Then on Monday (19 June 2017), Brexit negotiations officially commence. However, most attention next week will be given to the raft of appearances by Fed policymakers (I will be listening for any reservations about the Fed’s current speed of ‘normalisation’). The list of policymakers speaking includes: Bill Dudley, Charles Evans, Stan Fischer, Eric Rosengren, Robert Kaplan, Jerome Powell, James Bullard and Loretta Mester.