After a volatile week, most equity markets ended the week barely changed. 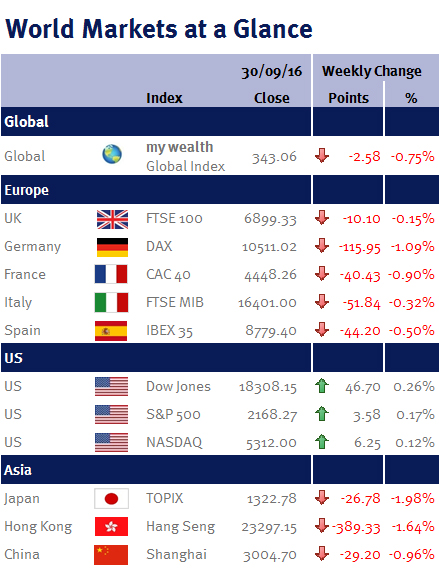 Worries over the health of Deutsche Bank, Germany’s largest bank in terms of assets, initially hurt markets given it faces a potential $14 billion legal settlement with the US government over sales of mortgage-backed securities during the mid-2000s housing bubble. However, worries eased toward the end of the week amid speculation that the bank would negotiate a much lower settlement.

OPEC (Organisation of Petroleum Exporting Countries) reminded people of its existence when it surprised the market by agreeing that they needed to cut production to help reduce the current global surplus. Whilst very few details were announced, production is expected to be cut by 750,000 barrels per day. Consequently, Brent crude rose to $47.71 from $44.86 a week earlier. This helped shares in BP (which ended the week up 3%) and Royal Dutch Shell (+2.2%).

However, in my opinion, the oil price is unlikely to have a sustainable long-term rally as OPEC quotas have historically been exceeded and if prices did manage to have a sustained rally there is plenty of shale oil waiting to come back online – I have long argued that OPEC can no longer determine the oil price, as the new swing producers are the shale explorers.