In last Sunday’s (24 September 2017) German elections, Angela Merkel won her fourth term as Chancellor. However, her victory was tainted and her power weakened after she didn’t fare as well as expected as the populist far-right Alternative for Germany (AfD) party gained 13% of the vote, to become the third-largest party in the Bundestag. As a result, she now has the tricky task of negotiating a more complex three-party coalition – a move that will potentially slow (or stop) her plans for closer European integration. 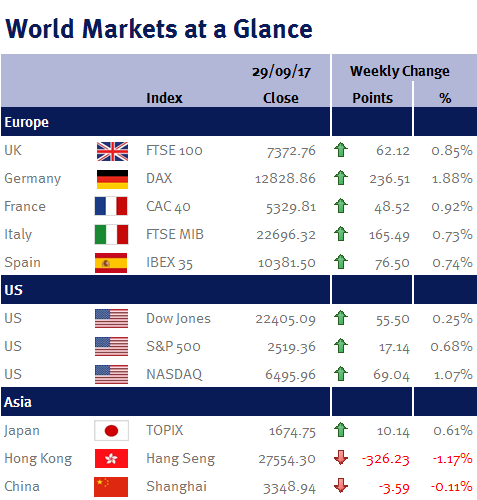 In the US, Donald Trump announced plans to try and simplify the US tax code (the proposal is for three brackets as opposed to the seven existing brackets – individuals would pay either 12%, 25% or 35%, compared with a maximum of 39.6% today), while corporation tax would be cut to 20% from 35%. The prospect of lower taxes helped the S&P 500 end the week at a new all-time high.

Today (Friday 29 September 2017) we saw a further deterioration in US inflation data. The core PCE, the Fed’s preferred inflation measure, fell to 1.3% – the lowest level since Q4 2015. While Janet Yellen this week (Tuesday 26 September 2017) reiterated that it was imprudent to keep monetary policy on hold until inflation reaches 2% and that the Fed should be “wary of moving too gradually”, several other policymakers this week expressed their doubts. For example, Neel Kashkari, the Minneapolis Fed President and Chicago’s Charles Evans, both said tightening before seeing clear signs inflation would be a mistake.

Unless the Spanish government can stop it, on Sunday (1 October 2017), Catalonia (which accounts for around a fifth of the Spanish economy) will hold an independence referendum. Although the vote has been ruled illegal, the government’s approach may spur separatist sentiment and put the euro under pressure.

Minutes from the last ECB monetary policy meeting are the economic highlight of this week coming, along with US employment data (non-farm payrolls; unemployment rate; the participation rate; and average earnings).

How to take control of your finances in 2021: bit.ly/39RxmN6 pic.twitter.com/SDHj…